Louisville lovefest at the Bulldogs in the Bluegrass closing ceremony

An event meant to celebrate the Yale students who came to Louisville for 10 weeks to do paid internships in the community turned into a celebration of all things Louisville. The Thursday luncheon at Vincenzo’s, also attended by the employers and mentors of this summer’s 23 students participating in the Bulldogs in the Bluegrass program, was an opportunity to hear about the interns’ work and for the interns to explain what they got out of the program.

Bulldogs in the Bluegrass was founded 17 years ago by Yale graduate Rowan Claypool, first as a scholarship program for students from Kentucky to attend Yale. Soon after, Claypool decided to use the program to try to address the perceived “brain drain” in Louisville. The program brings Yale students from around the world to the city where they engage in high-level internships (“No busy work,” said one Bulldog), live together at Bellarmine University, and are treated to outings, entertainment and field trips for 10 weeks.

The hope is that some of interns will fall in love with the city and maybe relocate here or encourage other people to do so. Based on the testimonies of the the 23 interns, it sounded like Claypool may have scored some future Louisvillians.

Students came from as far away as Ghana, Australia and Puerto Rico. Two local students also participated in the program. One of them thanked the program for “helping these people come to love Louisville as much as I do.” 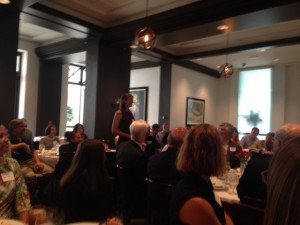 The other student from Louisville said he didn’t “rediscover Louisville” during the program because during those 10 weeks, he learned he’d never actually “discovered Louisville” in the first place.

Watching a short film about their experiences, it was easy to understand why so many of the students fell in love with the city. They saw every inch of it.

Field trips included Churchill Downs (where a generous donor gave each intern $100 to bet with), Forecastle Festival, Slugger Field, Falls of the Ohio, the Pride Festival and 21c.

One student said the group, collectively, spent thousands of hours and thousands of dollars at Comfy Cow. Local Yale alumni hosted parties and cookouts for the students throughout their time here.

The students also worked at some of the most exciting companies and nonprofits in the city, including New Directions, the Humana Foundation, the Learning House, RISE, the Louisville Zoo, the American Printing House for the Blind, JCPS and the Yew Dell Gardens.

Students praised the program for teaching them valuable life lessons. One student got up every morning at 5:20 a.m. and took three TARC buses to get to work. Another said it was so important to her that she spent the summer getting “out of the Yale bubble.”

An intern from New York said, “I don’t think I’ve ever experienced so much culture before … and I’m from Brooklyn.”

“Not only do we get paid for this internship,” said an undergrad from Florida, “we learned more than we do at Yale where we pay way too much.”

Every single intern gushed about how important the program coordinators Claypool and Robin Miller had been to the success of the program.

It’s hard to know exact figures, but Bulldogs in the Bluegrass claims at least 40 Bulldogs have moved to Louisville after attending the program — including an IL staffer’s fiancee.

Why? Well, as one intern said, “It’s easy to be happy in Louisville.”

Check out the article on Insider Louisville

To apply to any of the Bulldogs in the Bluegrass internships listed on the Job Board, please submit your application directly through Yale's Career Services Manager.

“I really cannot speak highly enough of my Bulldog experience. I had no idea this program was going to be so fulfilling and enjoyable."